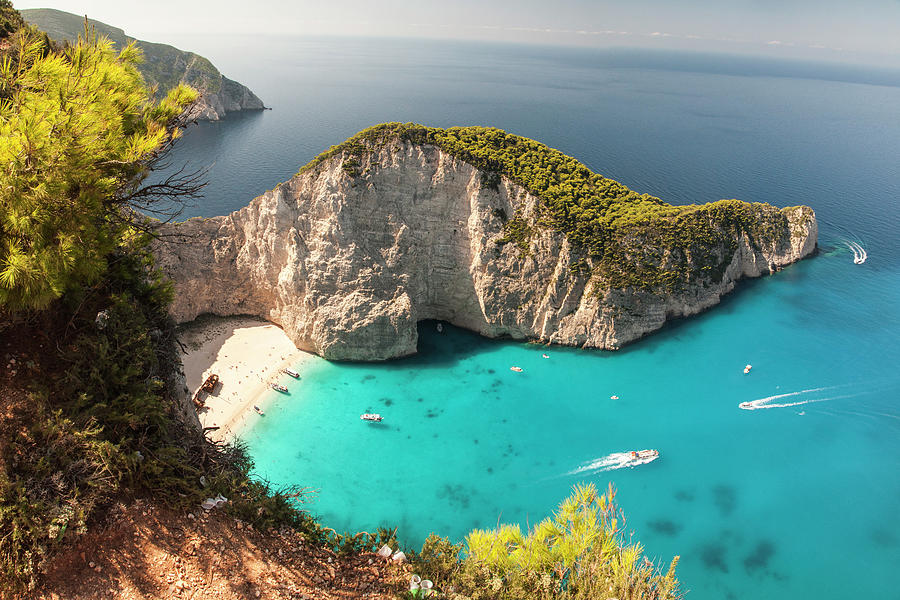 Shipwreck Beach or Navagio Beach, as it's sometimes called, is located on the west coast of the Ionian Greek island, Zakynthos.

The ship MV Panagiotis ran aground here on 1st October 1980 and was then abandoned. It is reputed that she was involved in smuggling contraband at that time. She was left in the sands of the beach and has since become a huge tourist attraction.

Navagio Beach is an exposed cove, sometimes referred to as "Smugglers Cove", on the coast of Zakynthos, in the Ionian Islands of Greece. Navagio Beach was originally known as Agios Georgios. On 2nd October 1980, a Freightliner, the MV Panagiotis, ran aground in the waters around Zakynthos Island on Navagio Beach during stormy weather and bad visibility. Some rumors say the ship was smuggling contraband; however official sources did not confirm this, and the captain was not convicted for such offences. The ship was abandoned and still rests buried in the limestone gravel of the beach that now bears the nickname Shipwreck, and has since become a huge tourist attraction.

The location was prominently featured in the hit Korean drama Descendants of the Sun, leading to a surge of interest among Chinese and Korean tourists.

The beach was briefly closed in 2018, and swimming and boat anchoring were forbidden after a cliff collapse over the beach dropped a large amount of rock. The beach reopened and anchoring permitted with restrictions because of concerns about future landslides.

The beach is spectacular and of course, it’s best viewed from above. For those who want to admire the beach with the wreck from above, it is recommended to reach the monastery of Saint George, that is considered to be the best viewing point of the iconic shipwreck.

Enclosed within large cliffs which give it this remote, inaccessible feel, the beach is only accessible by boat which you can take from the island’s capital, Zakynthos or other smaller ports nearby. There are boats and organised trips leaving from Zakynthos every day and very regularly.

Rob, Great view and stunning clarity in this image love the story of how the beach got its name

Stunning view. You make me want to visit! l/f

Hi Rob - so beautiful! Love it.