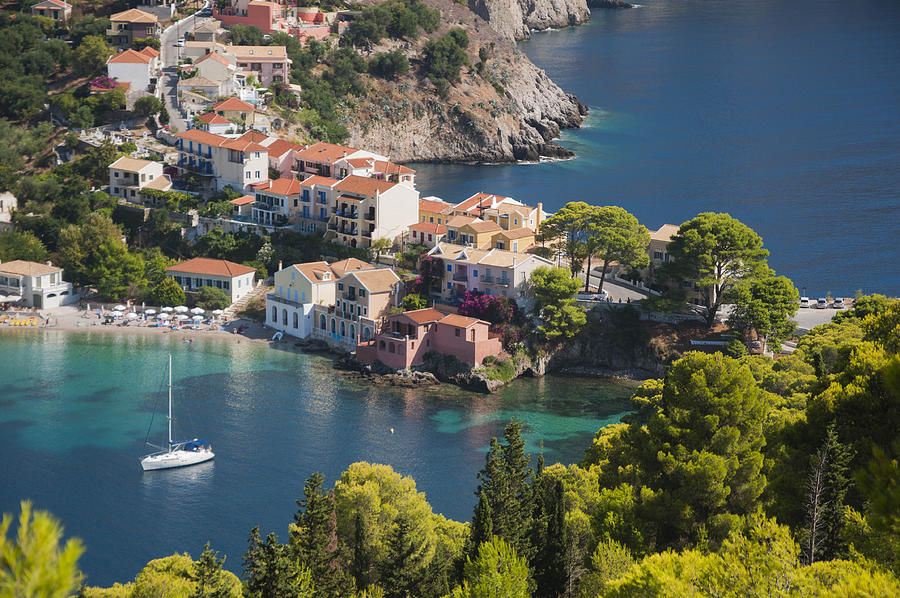 ** UPDATE: On 17 Sep 2020 a massive hurricane in the Mediterranean devasted this lovely town. Part of he mountainside was washed down in a slurry and engulfed the town and harbour area with over 5 ft of rock and rubble. The access road is severely damaged cutting off the town. **

This photograph was taken from the grounds of the Venetian Castle situated on an isthmus overlooking the small town of Assos. The striking colours of the sea are breathtaking.

Assos is a village on the west coast of the island of Kefalonia (Cephalonia), Greece. It is part of the municipal unit Erisos. Assos was founded under Venetian rule and it served as the administrative capital of northern Kefalonia from 1593 onwards.

Marino Gentilini, an Italian army engineer, was commissioned by the Venetian Senate in 1593-95 to build the Assos Castle, one of the largest in Greece. The castle was initially built with the view that it would protect local populations in case of an invading attack by passing Turks or pirates, but for various reasons, such as the lack of natural springs for water supply, it was never adopted as a fortress and gradually the grand plan was dropped.

Congratulations, Rob! Your outstanding Assos Photograph is now featured in the 100 Favorite group!

This is stunning Rob

Beautiful scene! I wish I was there!