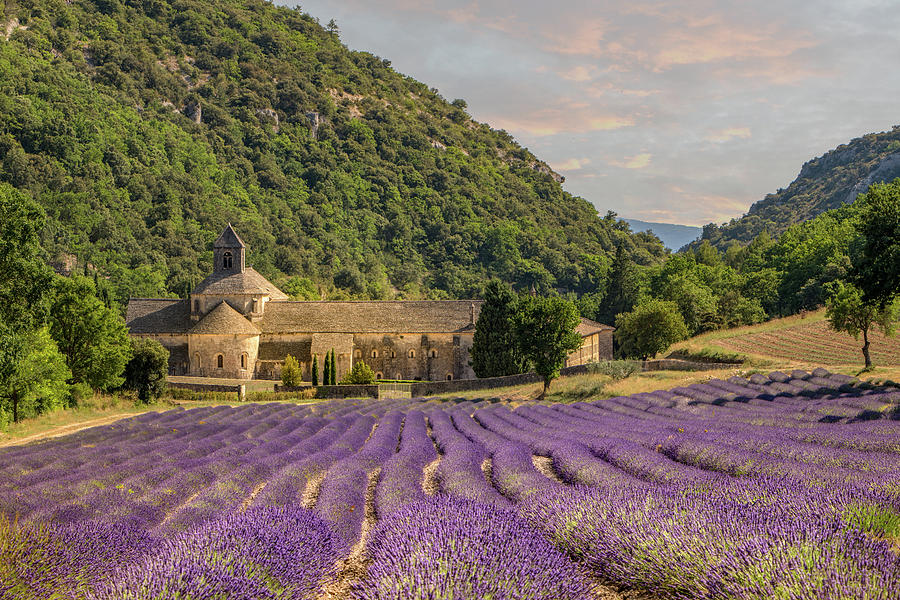 This is one of those locations that is on everyone's list when they visit this area of France. The picturesque Abbaye Notre-Dame de Sénanque, with its lovely violet lavender field in front, is located near Gordes in Provence in the south of the country.

Due to its popularity, the authorities have had to erect a high fence all around the lavender field you see in the front of the Abbey. This is because too many visitors would walk and pose aimlessly and thus spoiling photo opportunities for others.

Sénanque Abbey (French: Abbaye Notre-Dame de Sénanque) is a Cistercian abbey near the village of Gordes in the département of the Vaucluse in Provence, France.

It was founded in 1148 under the patronage of Alfant, bishop of Cavaillon, and Ramon Berenguer II, Count of Barcelona, Count of Provence, by Cistercian monks who came from Mazan Abbey in the Ardèche. Temporary huts housed the first community of impoverished monks. By 1152 the community already had so many members that Sénanque was able to found Chambons Abbey, in the diocese of Viviers.

The young community found patrons in the seigneurs of Simiane, whose support enabled them to build the abbey church, consecrated in 1178. Other structures at Sénanque followed, laid out according to the rule of Cîteaux Abbey, mother house of the Cistercians. Among its existing structures, famed examples of Romanesque architecture, are the abbey church, cloister, dormitory, chapter house and the small calefactory, the one heated space in the austere surroundings, so that the monks could write, for this was their scriptorium.

A refectory was added in the 17th century, when some minimal rebuilding of existing walls was undertaken, but the abbey is a remarkably untouched survival, of rare beauty and severity. (Part from Wikipedia)

What a sight to see! Excellent capture!

fantastic, I can smell the lavender

love this so much as I have been to Gordes and it is just spectacular with the lavender and sunflower fields. Just beautiful Rob