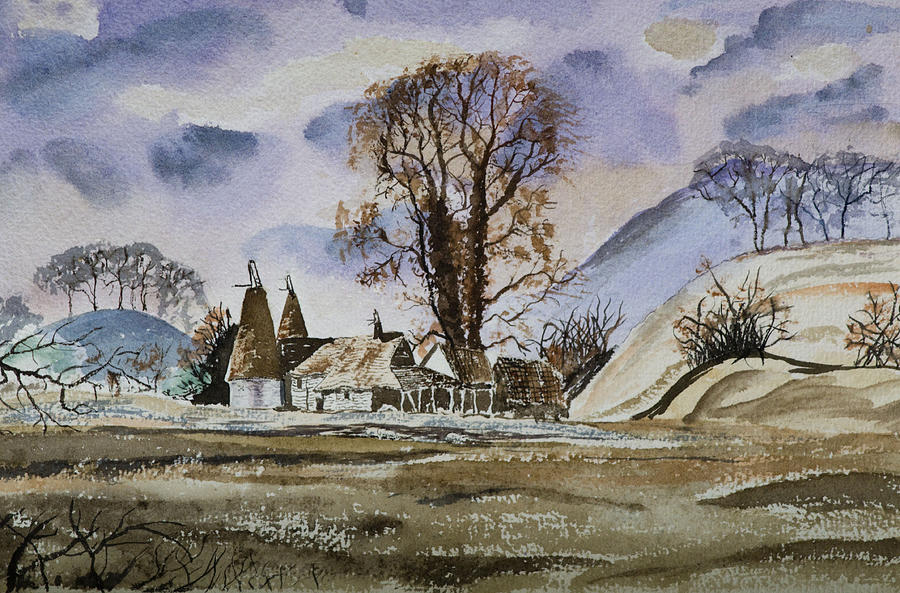 Here is a rural scene of a farm with a couple of oast houses of yesteryear in the Kent countryside in southern England.

An oast, oast house or hop kiln is a building designed for kilning (drying) hops as part of the brewing process. They can be found in most hop-growing (and former hop-growing) areas and are often good examples of vernacular architecture. Many redundant oasts have been converted into houses. The names oast and oast house are used interchangeably in Kent and Sussex. In Surrey, Hampshire, Herefordshire and Worcestershire they are called hop kilns.

They consist of a rectangular one or two storey building (the "stowage") and one or more kilns in which the hops were spread out to be dried by hot air rising from a wood or charcoal fire below. The drying floors were thin and perforated to permit the heat to pass through and escape through a cowl in the roof which turned with the wind. The freshly picked hops from the fields were raked in to dry and then raked out to cool before being bagged up and sent to the brewery. The Kentish dialect word kell was sometimes used for kilns ("The oast has three kells") and sometimes to mean the oast itself ("Take this lunchbox to your father, he's working in the kell"). The word oast itself also means "kiln".

An excellent watercolor. I love the textures in the grass.