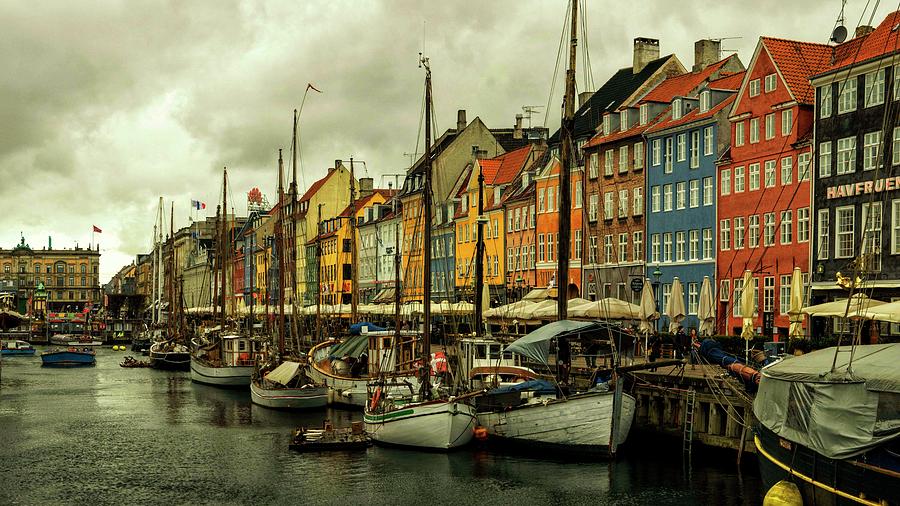 Nyhavn is one of those places that makes you feel positive as the people are relaxed and happy. The houses on the northern side are beautifully painted in an array of vibrant colours and the bars offer wonderful Danish beers. It's no wonder that the Danes are said to be among the happiest in the world.

Nyhavn (Danish for New Harbour) is a 17th-century waterfront, canal and entertainment district in Copenhagen, Denmark. Stretching from Kongens Nytorv to the harbour front just south of the Royal Playhouse, it is lined by brightly coloured 17th and early 18th century townhouses, built out of wood, bricks, and plaster with the oldest house dating from 1681. There are also several bars, cafes and restaurants.

The southern side of Nyhavn has lavish mansions lining the canal, including Charlottenborg Palace at the corner of Kongens Nytorv.

Many historical wooden ships are moored in the harbour and some even offer visitor excursions. This city is a gem for keen photographers.

Just love the way this makes me feel

What a magnificent location, capture comp and lighting, wow! LF

Makes me want to board a plane to Copenhagen!

Nyhavn looks inviting even on this cloudy day. Great mood captured, and love the contrast of the colorful homes against the gray sky and water.