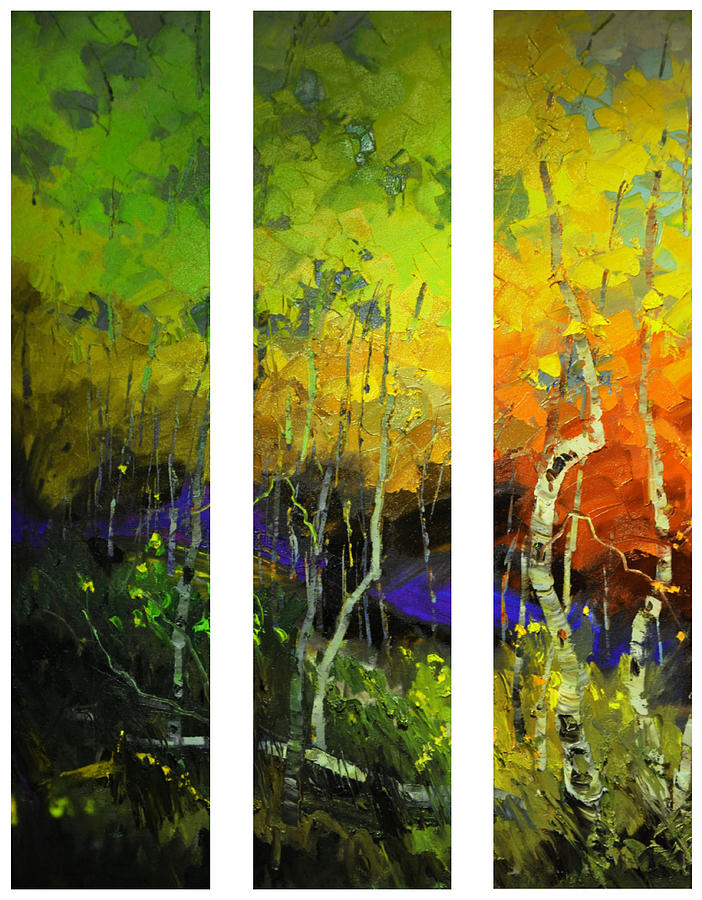 Aspens through the seasons make up this triptych.

Aspen trees are all native to cold regions with cool summers, in the north of the Northern Hemisphere, extending south at high-altitude areas such as mountains or high plains. They are all medium-sized deciduous trees reaching 15–30 m (49–98 ft) tall. In North America, it is referred to as Quaking Aspen or Trembling Aspen because the leaves "quake" or tremble in the wind. This is due to their flattened petioles which reduces aerodynamic drag on the trunk and branches.

Aspens typically grow in environments that are otherwise dominated by coniferous tree species, and which are often lacking other large deciduous tree species. Aspens have evolved several adaptations that aid their survival in such environments. One is the flattened leaf petiole, which reduces aerodynamic drag during high winds and decreases the likelihood of trunk or branch damage. Dropping leaves in the winter (like most but not all other deciduous plants) also helps to prevent damage from heavy winter snow. Additionally, the bark is photosynthetic, meaning that growth is still possible after the leaves have been dropped. The bark also contains lenticels that serve as pores for gas exchange (similar to the stomata on leaves). (Wikipedia)

Christopher, thanks so much for the feature in the 1000 Views on 1 image group!

Congratulation.....your wonderful work has been featured in the 1000 Views on 1 Image Group l/f/p

Rob, Great image of Aspen through the seasons in this triptych